Why Etymology is Important 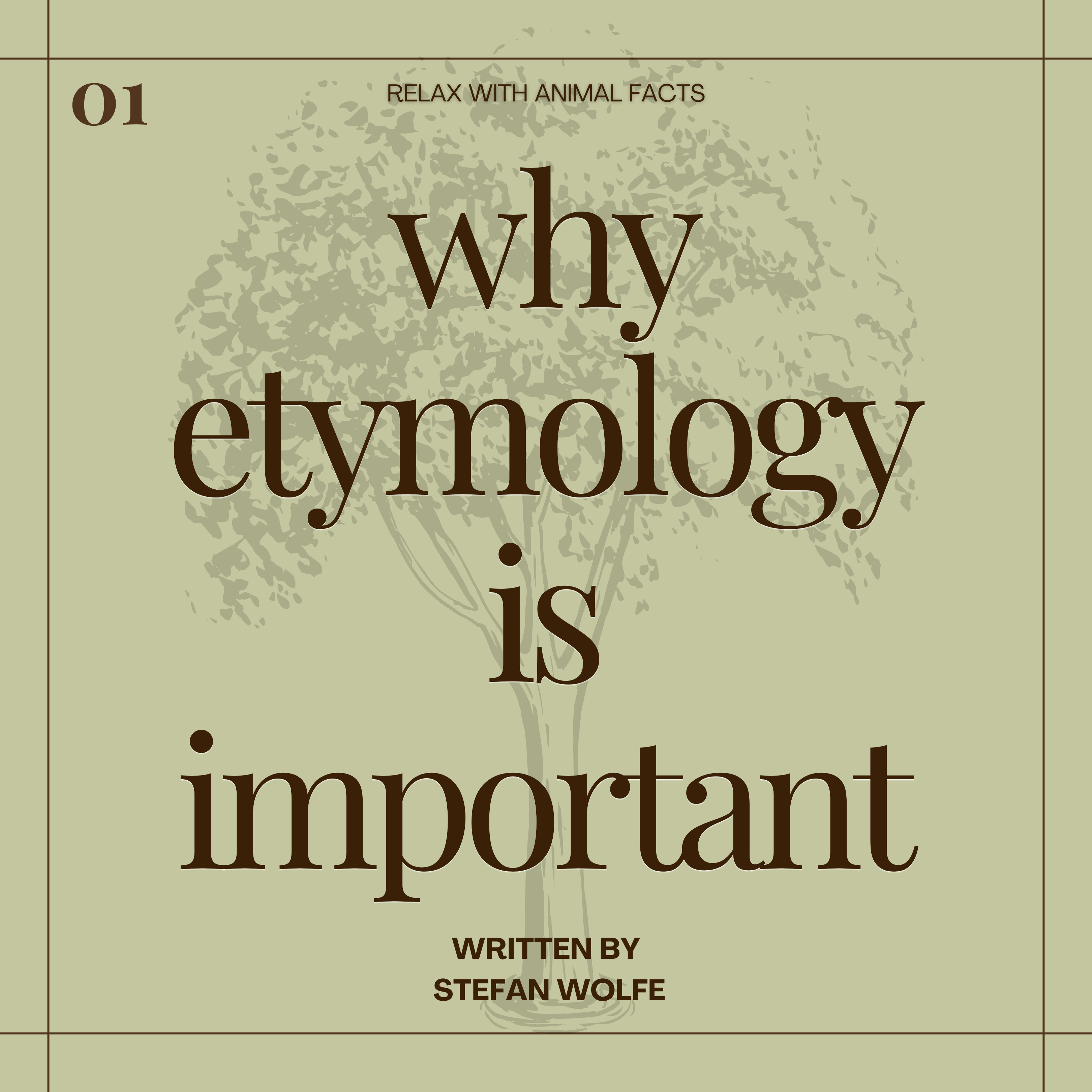 You may have noticed on the Relax With Animal Facts Podcast we always end the show with the etymology of the name of the animal being covered. There is a reason for the inclusion of this altogether neglected study in every episode, and I seek in this post to explain why.

Etymology as defined by the Oxford Dictionary is:

The study of the origin and history of words and their meanings.

We may even employ the study of etymology to figure out this words' own historical origins. Stick with me here; there will be some technical jargon, but it will all be explained. Whenever you read a word ending with the suffix "-logy" it means that it is a "study of" something in particular, an import of the Greek word logia representing the same concept. We may take the word "biology" for an example. Biology is the "study of" (or logia) of bios, meaning life. If one were to be familiar with some of these root words and their grounding in other historical languages, the meaning of the term biology could be deciphered without googling its lexical definition; biology is the study of life!

The word "etymon" also comes from Greek, and means the true meaning; the original sense of something. From these root words "etymon" and "logia", we may see how the lexical definition above provided by Oxford Dictionary is right on the money.

Etymology is the study of the true meaning of words, or the original historical usages of words.

A couple of fair questions after all of this may pop into your mind, my dear reader, and they might be: "Who cares?" or "So what?".

In the realm of animal facts, etymology on the surface might seem irrelevant to us, but I posit to you that this is not the case. At the end of this blog post; I hope to have won you over as to its relevance not only in the learning of our favorite critters, but in many other areas of our human experience.

Here are some ways in which the study of etymology enriches our understanding of our animal friends:

1. It grounds them in their respective historical contexts in relation to us and enriches our appreciation of them.

History is unfortunately falling out of fashion in our days to our great loss, but that is for another blog post! Your favorite animal has been around well before you were born; and exploring the annals of history through the etymology of the name they bear can give you a new-found appreciation for them. Let me use a more obvious example to illustrate what I mean. Let us say that you went to another part of the world that has never seen nor heard of the Carrier Pigeon. I suppose you could tell them that it is a bird, you may describe their colors beautifully, or the regions they typically inhabit. Then you begin to describe why they were given their names. You give the anecdote of the Carrier Pigeon named "Winkie" that was awarded a medal for its act of heroism in the saving of a World War II bombing crew ditched in the North Sea. In the time of these mens' dire circumstances, Winkie the Carrier Pigeon flew home to its loft to alert the teams' air base colleagues as to their need of help. Due to Winkies' intervention, these men were spared a cruel fate! The Carrier Pigeon is called so because of their incredible reliability in delivering and returning messages. How much more depth have we given this animal now that we know the etymology of their names and their place in history? If we think that the Carrier Pigeon is named the Carrier Pigeon "just cause"; we are robbing ourselves and our hearers of some well-deserved admiration for our feathery historical heroes.

2. It allows us to know something about animals we have never heard of before.

Simply through the etymology of a name of an animal, we can learn much before diving into specific facts. Let us take the Dromedary Camel as an example. Many of us know what a camel is; at least in the broader sense. We imagine a large, humped creature that can live long amounts of time without water in their long treks across the deserts. We see here however that this animal is a "Dromedary" camel. How is the Dromedary Camel distinguished from other camels? A study of the etymology of the word dromedary would reveal that the Greeks referred to this animal as the dromas kamelos; literally translated into "running camel". Perhaps they were thought to be a bit quicker then their other larger camel counterparts! We would then see the shifting of the meaning as it is translated into Late Latin as dromedarius, meaning simply "a kind of camel", before becoming dromedaire, the Old French word taking on the meaning "thoroughbred Arabian camel". Just from the etymology of its name we have learned its most relevant geographic distribution, some interesting historical views of this particular camel, and possibly some physiological distinctions. We are now going into our research with a richer starting point; ready to see how applicable their name is to the facts!

3. Importantly, it gives us the reason why animals bear the name they do.

Why in the world is the hippopotamus called a hippopotamus? Such a long and fantastical name cannot have been assigned arbitrarily! From a search into the etymology of the word hippopotamus, you would discover that the Greeks called it the "ho hippos potamios". Literally translated this means "the horse of the river". Have you ever thought about a hippopotamus as a river horse? If not, you now have an insight into how the Greeks may have thought about the hippo! Now if somebody asks you to describe the hippopotamus in two words or less, you have an answer that is perhaps as historically relevant as it is hilarious.

4. It guards us against erroneous stipulative names.

What I mean by a stipulative name is a new name which is given to a freshly discovered animal species which has not been yet named, or a new name given to an animal already previously named. If there is anything that we have learned so far; it is that the names of animals and the words we use to describe them are important, because they tell us about what they are. Let us imagine a new species of Sloth is discovered in the Amazon Rainforest that has bright pink fur (sounds awesome, right?). You then read in the news that a new species of sloth has been discovered; the Dromedary Sloth! From what we have already learned regarding the etymology of the word dromedary, would you be satisfied with such a distinction for our little newly discovered pink friend? This particular sloth was not found anywhere near Arabia, nor does it run or move any faster than its other sloth counterparts; so what gives? The study of Etymology has now guarded the scientific community and the general public from an erroneous distinction that would mislead people as to the characteristics of this new sloth. This of course is an exaggerated example but I am sure you get the point.

Etymology is a study that can be tremendously helpful in our understandings of different critters and their respective histories; something I hope to have convinced you of in this short blog post! That is why on the Relax With Animal Facts Podcast we always end with the etymology of the name of the animal that is being covered. There are so many fields of study that can help us get to know the animals we love more, and this is simply another tool by which we can grow the extent of our appreciation of them.

Thank you for taking the time to read this post, and if you enjoyed it; be sure to share it!

Wild Complexities Of The Wild

The host of the show Relax With Animal Facts. 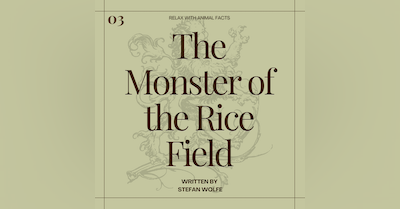 Tanuki: The Monster of the Rice Field

What animal has earned the reputation as the rice field bogeyman? 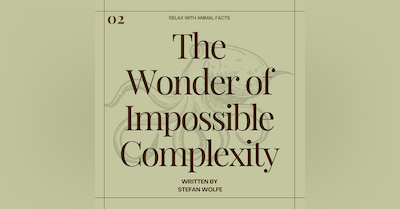 The Wonder of Impossible Complexity

Introduction On the Relax With Animal Facts podcast, we cover many animals which have some amazing abilities. Here are just a couple of examples we can …